Welcome To The Falls Road 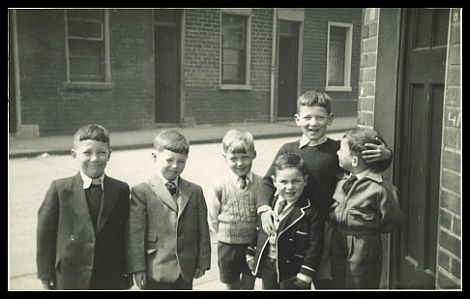 We Will Sell The Pig And Move To Glasgow ?

It‘s a wonder I didn’t end up as a barman, I spent so much time in bars as a kid selling cooked pigs feet around them back in the 1950’s. Funny enough back then you would hardly have seen a woman in a bar which were very much the domain of men and in that camera in my head, some call memory, I have images of wee men with flat caps (scoops) and neckerchiefs and depending where the bars where that you were selling the trotters in, there was sure to be one singing , for example up the Shankill ,….

Some would say these men had an identity crisis whilst down the Falls they could often be heard singing another favourite song of those days …..

“ We’ll sell the pig and the cow my boy

And we’ll send you far away

For in Paddy’s Land but poverty you’ll find.”

I think perhaps the nearest they ever got to a pig was the cooked pigs feet I was selling for a bob each or 3 for half a dollar.

It wasn’t every bar that permitted singing and one story I remember was when Aidan Beagon who ran a bar at the Falls/Springfield corner ordered a ‘singer’ out of the bar he got a humorous reply when the wee man retorted , “You’re throwin’ me out for singing ?… if you give a bird birdseed surely you can expect it to sing”.

Many bars displayed posters that read “NO PARTY SONGS ALLOWED” but that didn’t mean if you were having a birthday party etc you couldn’t sing, it meant no Rebel Songs or Orange Songs allowed and if you heard someone shout, “A

bit of Free State Border For the Singer

he was calling for a bit of order and quietness for the singer … joining in singing was not acceptable either, anyone daring to do so was quickly told , “One Singer One Song”

In our then house in Ballymurphy there was always music, no drink though as neither of our parents drank, My father would give a tune on his ‘Jews Harp’ or my mother on her ‘Harmonica’ and both were great singers , at the drop of a hat my father would give you “Annie Lowry” or “I’ll take you home again Kathleen” which incidentally was my mother’s name, they were simple pleasant oul days, but my mother would stir up heroic images of patriotic past days when she’d sing “Tipperary So Far Away” or “Father Murphy” , she loved a rebel song…it was a good job she didn’t drink for she would have been banned from all the bars with her “Party Songs”, and mischievously she’d misquote the Radio Eireann show and laughingly say, “If you must sing … sing a Rebel Song”., just an Irish Song wasn’t good enough for Kitty. HISTORY OF FALLS ROAD CAN BE FOUND IN THE RUSHLIGHT MAGAZINE